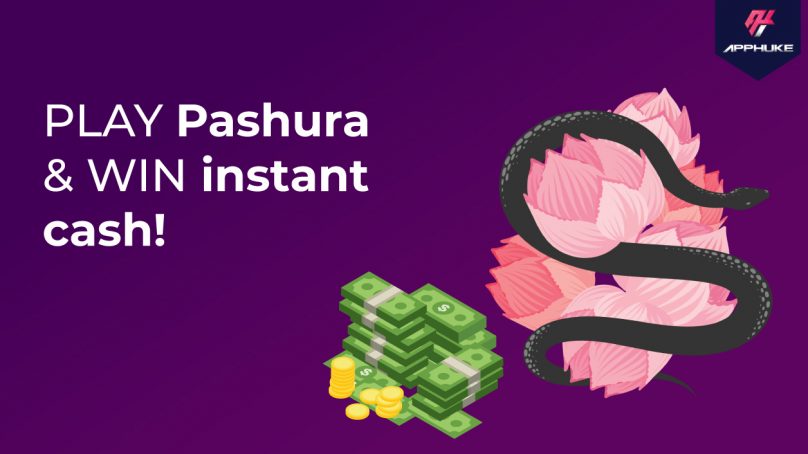 Pashura- Collect numbers and save your snake.

Pashura is an online fantasy game platform where the users can play one super easy game andearn money through it. The app has a 2-player snake numbers game, where the users are connected online with random participants. The player who scores more points wins and earns money for his win. Also, to get the money directly in your Paytm wallet, you have to enter and register with your Paytm number on the app.

The Pashura app has been designed in a very easy manner. The features and software of the app are very easy to operate in nature so that first-timers can easily operate the app. The app has a purple and yellow coloured theme and you can easily locate a home, wallet options, and settings at the bottom of the screen. The “Home” option is where you can find the “Play” button and start your gaming journey on the app.

The game that is available on the Pashura app is super easy and fun to play for any user, eitherthey are a beginner or they have the experience of playing online games. The app has some friendly features. The game on Pashura requires the users to react quickly and change their snake’s position while saving it. The user can also change the language as per their preference as the app has English, Hindi, Punjabi, Marathi, Gujarati, and Kannada.

The Pashura app has one single game available on its platform for the users. However, that very single game was interesting and fun to play, and users can even earn money if they win the game on the Pashura app. In the game, the user has to quickly react to the surroundings while saving its snake from getting killed from the obstacles in the path along with adding points to it for beating the opponent. The one who has the highest score wins the game and earns money.

The app has a moderate gratification level because of the availability of one single game. But if played with full concentration, that single game can generate the interest of many users.

A good and easy way for the users to earn money by playing a simple game.

BaaziNow- Earn money through your GK

MPL– A Platform for Fantasy Sports

Dracotap- Save the dragon to earn money

Call of challengers- We came, we quizzed & we conquered

Hello Quiz- Unlocking knowledge at the speed of thought Hot