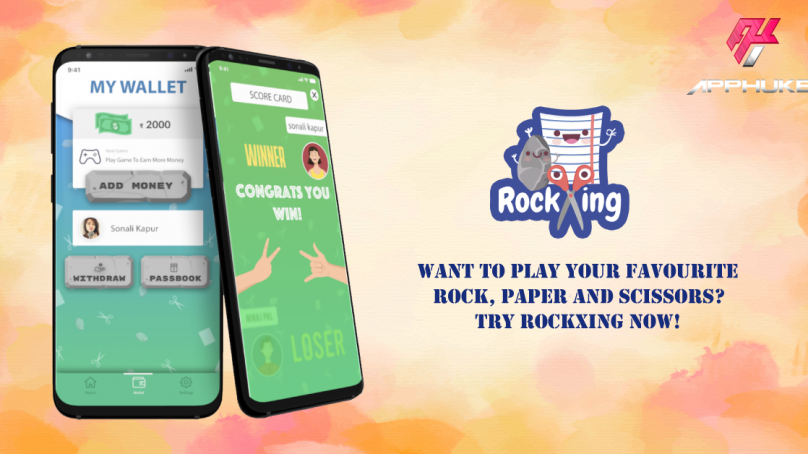 Rockxing is an online fantasy game platform where the users can play one super easy and popular game that almost every user has played endless times in their childhood. The app has a maths quiz and rock, paper, scissor game, where the users are joined with online random participants. The users are provided with opponents within 20 seconds, and the one among both who scores more points wins the game and gets to earn money for their win. Moreover, the users have to enter and register their verified Paytm number on Rockxing to withdraw the earned money in their account.

Beginner or experienced, the Rockxing app’s design is very convenient for every user. The features and graphics of the app enhance the overall design of the app. The colourful theme of the app is worth complementing. At the bottom of the screen, the users can see the home, wallet options, and settings options. The “Home” option is where you can begin to play the game, whereas the wallet option shows your wallet balance. In settings, you can read their terms of service and know about the refer and earn system along with many other things related to the app.

The single game available on the Rockxing app is the most popular luck-based game that almost every person has played in their childhood. The app has some user-friendly features, which keep them interested in the game. The Rock, Paper, Scissors game on Rockxing is super engaging. Overall, the app’s design is handy and won’t get its users bored.

The Rockxing app has one single game that consists of a maths quiz and a rock paper scissors game on its platform. As soon as the user taps the “Play” button, they are provided with an opponent within 20 seconds with whom they have to compete to win. Before starting the actual game of rock paper scissors, the users have to answer 3 maths quiz questions. After that, the user gets 3 chances to play rock paper scissors, and the one who wins gets to earn double the money that they spent on entering the game.

The gratification level of the app is okay. The app has the most interesting and played game that is rock paper scissors. The users can easily play the game and earn money with their skills.

It is an app that can attract all categories of users and help them to earn easy money by playing the game.