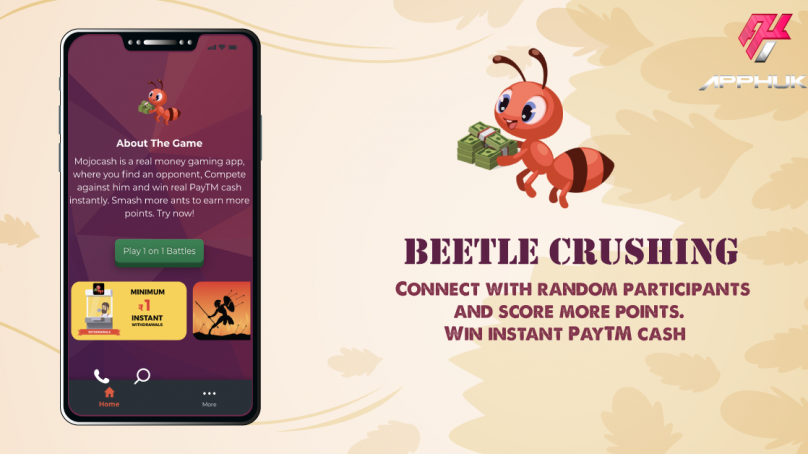 MojoCash is a real-money gaming app, where you play an easy game of smashing ants with a given opponent to score points and earn money. In mojocash, the more you smash, the more you earn. After winning, you can withdraw your prize money instantly through Paytm. Your withdrawal amount can be as low as Rs 1, and the cash prize can go as high as Rs 8000. Mojocash is a product of Comely Enterprises, which has produced many similar games.

The design of the game is as simplistic as the game itself. The theme consists of a purple shaded background with not a lot of animation in it, except the signature Red Ant, which has been animated with a fun and attractive look. The logo of the app is again very minimalist, with the Red Ant holding cash, on a white background. The design has a few shades of black in a few options, however, most of the colour in the theme is added by the game itself.

Since the game is very simple and doesn’t have any heavy graphics in it, there is no hanging or lagging of any sort. Therefore, the game runs very smoothly. The sign-up procedure is easy and doesn’t require much details, except your username and phone number. The customer service is satisfactory as well. Overall, the app provides an unproblematic experience to its users.

The application consists of only one game, ie., smashing ants. It is very simple and does not require much effort. To play the game, you need to add money from your account to the wallet first. With that money, you have to buy a ticket to play a one on one battle. The only rule of the battle is to smash as many ants as you can. Whoever smashes the most, wins the game. The tickets start for Rs 10 and go higher after that.

In this game, you have a chance to double your money instantly, and the investment is of minimum Rs. 10. However, there aren’t any special contests, or lucky draws or bonuses in the game. That being said, the game provides an average gratification, which makes sense for a game as simple as this.

The game in MojoCash is fairly simple and completely based on your reflexes. Somehow the idea of smashing the ants is very fun and satisfactory. There isn’t much provided by the app for gratification. Even so, the game is engaging and keeps you hooked.

Khel9- Bet your knowledge and skills into online casinos and sports