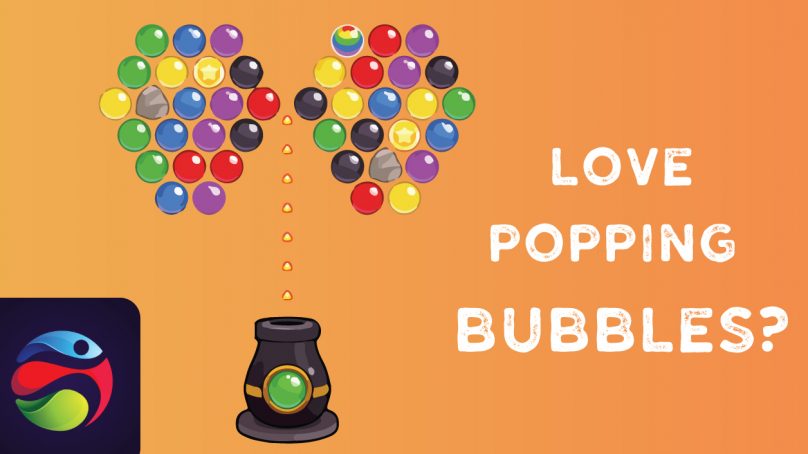 Bubble Popper is a stylish and efficient version of the old school Bubble Shooter game. It is an effortless way to earn money while having fun. It is not only a joyful time pass but also a quick and reliable source for earning.

Bubble Popper’s logo is an attractive design comprising a circle with three colors- Red, Blue, and Green. Such colors in the logo make it look even brighter on a black background, making it catchier and more appealing. Not only the app, but the overall game is full of bright and colorful graphics, which makes the game more compelling and harder to resist. Some prefer the dark theme mode to suit the low brightness of the phone. So, they might not prefer playing this game after having a hectic schedule. Nevertheless, the interface is appealing enough to overrule this factor at times.

Bubble Popper is well-known game where the user has to shoot and score to win and earn. Since it is based on the classic game of bubble shooting, it is easier to understand and play. Even though most of the players are familiar with the rules, the app provides the rules and procedures in an easy-to-understand format. It has a user-friendly interface and provides a smooth gameplay experience. It is a lag-free app, due to which it continues to build interest. The game only has a 1 vs 1 game mode in which one player plays against another player chosen online, which might consume the player’s extra time to find an opponent at that very instant.

It consists of only one main game: bubble shooting but with a newly added feature of earning with each victory. It also allows the user to choose and play with increasing fiscal benefits per game. The game only has the 1 vs 1 mode. In this mode, the opponent is chosen on the spot amongst other players available at that instant of time.

The gratification provided by this game is above-average. When you win in the 1 vs 1 game, you win the money which is pooled by you and the opponent for that specific game. However, the game takes time to find an opponent and then win against them.

World Series of Poker (WSOP)- An Over the top design