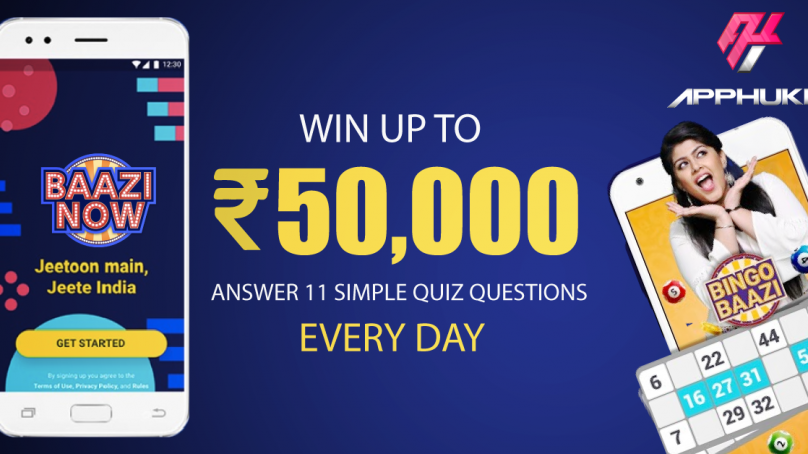 BaaziNow- Earn money through your GK

BaaziNow is an online fantasy game platform that hosts live trivia quizzes that are somewhat similar to the quiz shows that are held on TV. The users of the app just have to answer a few general questions and then they can earn quick cash. The BaaziNow app has managed to a mass a huge user base in a short period.

The developers of the app have done a good job of designing the app by keeping it simple. This has made the app easy for the users to make the most out of it while having fun by playing games at the same time. The best thing about the app’s design is that it is super convenient to use. It helps the users to earn money without them having to perform any extra downloads and by just answering the quiz questions. It also benefits a lot in increasing knowledge as it asks many questions related to current affairs. The logo of the app has the app’s name, “BaaziNow” written on white background in blue and red colour. The overall design of the app is smooth and some of its features make it a great option for users.

One of the best features of the app is its simple user interface, which also provides ease for users to play and win money. Before the users can begin with answering questions and earning money, they first have to sign-up in the app. A small video is played after the sign-up, where the basic rules of the game are instructed to the users. The registration process in the app is quite quick and it also does not have any in-app purchases. To keep the users engaged, the app also plays a short video before the quiz begins. This particular feature is called “Cheat codes” and “Gyan Guru”. These videos give the players a hint related to the questions that will be asked during the quiz.

Every day the app goes live with a specific quiz at 1 pm and 9 pm, where all the users play the same game simultaneously. The quiz runs for about 10-15 minutes. The live anchors who conduct the quiz ask 11 questions to the users and if they answer all those 11 questions correctly, then they become eligible to win the cash reward. Each question that is asked in the quiz has 3 options, and you only have 10 seconds to answer. In case you miss a question, you wouldn’t be allowed to play further.
There is the facility of earning extra lives to stay in the game and continue answering questions. You can earn these lives by referring others to play the game, and then both of you would get a life. However, you can only use one life per game and if you are unable to answer twice in the quiz, then you are automatically disabled from the quiz. After every game comes to an end, multiple winners are announced who give the most correct answers. In the case of multiple winners, the prize money is divided amongst the winners, so there isn’t any feeling of discrimination among the players.

The app is a genuine way to make money just by answering a few general knowledge questions. However, due to its enormous user base, it can be a little difficult to make a load of money in one turn. You will have to be regular on the app so that you can keep the money rolling into your BaaziNow wallet. But, overall it’s an interesting app that keeps you hooked up and eagerly waiting for the following quiz. The simplicity and intuitive features of the app are its plus point.

The app is good and has some unique features. However, it can have better back-end support. Since the users only get 10 seconds to register their answers, the app can ensure that there isn’t any latency due to slow servers.

Also read review: Pashura- Collect numbers and save your snake

Ludope-Never too late to earn from Ludo!